On Tuesday May 4th, immigrants, refugees, and their supporters virtually descended on the Massachusetts State House for “Immigrants’ Day.” The event was hosted by the Massachusetts Immigrant and Refugee Advocacy (MIRA) Coalition. The event began with speeches from Boston Mayor Kim Janey, Senator William Brownsberger, and Representative Ruth Balser, as well as Gabriel Camacho of the United Food and Commercial Workers Union Local 1445 and Dalida Rocha, Political Director, Service Employees International Union Local 615. After the speaking portion, participants were sent to regional breakout rooms to talk with their legislators about why supporting immigrants through legislation matters to them.

We’ve been fighting for the Work and Family Mobility Act for years now. Fighting for this legislation has taken us traveling down different roads – formerly calling it the Safe Driving Bill. As a domestic violence Advocate, I support this bill because I know that having a safe driving license is not a luxury- it is a basic need. For survivors of domestic violence, a safe driving license is a tool to escape, allowing them to run faster. One of the safety planning tools we use with survivors who are thinking about leaving their abuser is to talk with them about where to store their important documents and keys. Many might choose to leave them locked in a compartment of the car, with keys close by. But my safety planning with undocumented survivors eliminates this option. Leaving is one of the most dangerous things a survivor can do, and to lose any options when someone is safety planning makes an already risky situation even more dangerous. This bill is so important because of the impact it can have. That’s why when the MIRA Coalition asked which bills REACH was able to support, this was at the top of the list.

The Safe Communities Act is another bill that is close to my heart because of my work with survivors of domestic violence. There is an assumption that many people make about why survivors don’t leave or call the police, or why they won’t go to court. The media has recently highlighted so much of why there is so much (valid) fear among immigrants. The media has shown ICE (Immigration and Customs Enforcement) waiting at court houses, police officers calling immigration, and agreements like the 287G agreements between sheriff’s departments and ICE. The undocumented community is petrified. They’re afraid to call the police or go to courts. One survivor described the feeling of seeing the police coming as a feeling of having to flee, to run away from those who were called to help. To have to fear the police is inhuman. We all deserve to feel safe to call the police. We all deserve to feel safe from fear.

Sometimes it’s hard to publicly fight for a bill when you’re an immigrant yourself or you work for an organization where you rely on donors from your community … I know that not everyone is going to support this bill. Sometimes the fear of losing financial support makes you feel like you’re walking on eggshells. Sometimes I fear that if I advocate for the Work and Family Mobility Act or the Safe Communities Act, it might mean losing some people’s support for REACH. I worry that I may be taking away from other victims because not everyone supports the undocumented community -it’s sadly a very political subject. I think about what losing funds might do for ALL survivors. It’s so sad for me to think like that- if I advocate for this, it might take away support from other victims. And yet I also know the impact of what these bills would do for.

When you work one-on-one with survivors, you know their needs and feel their fear. Despite having done this work for years, I’m still filled with so much emotion when I hear this from survivors. When I talk with them, I tell them “Your voice is important. Your voice is powerful.” And I invite them to share their story with others who have the power to make changes to the law. The survivors who choose to do this are often people who I have worked with for years, slowly gaining their trust. I know that their testimony, more than anything else, will impact Senators and Representatives. But still, the survivors are so afraid… “Will they know my name? Share my story? Check my status?” Again, it is that feeling of walking on eggshells… We safety plan around speaking out- talking with attorneys and others about the potential risks. And despite the danger, this Immigrants’ Day I again saw so many choose to speak out. Not only for themselves, but for their communities. 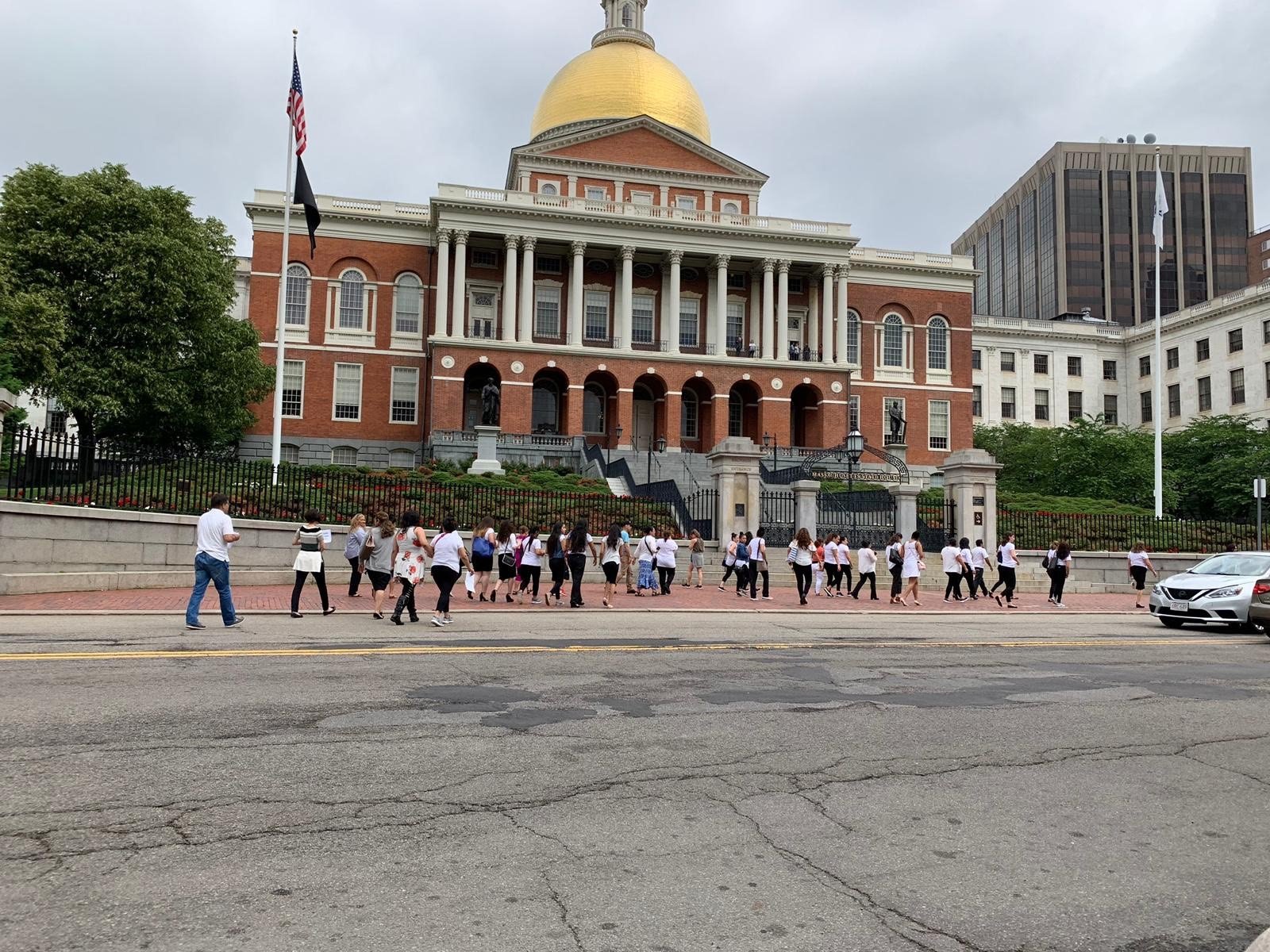 Exposing your trauma in front of 400 people is not easy. Whenever I attend these events, I break into tears. When I see how Latinas Know Your Rights  –  a legal advocacy training program that we do in collaboration with Greater Boston Legal Services – has changed the lives of so many undocumented persons, it’s incredible. I hear people speaking out loud about their experiences, people who would not even look into my eyes as they shared their stories when we first met. These same people are now speaking in front of legislators at an event held at the State House, even virtually. It is priceless. It takes courage to stand in front of anyone, especially a crowd that includes powerful policymakers, and talk about your most painful – and often times shameful – experiences. Despite the overwhelming pressure, and feelings of embarrassment, these victims stand up confidently and share their testimony in their own language. Neither the language barrier nor the fear of ridicule stops victims from speaking out. This shows how important it is to victims that they put themselves on the line for change. I can’t even express how it feels. For me, cohosting the regional meeting and seeing the presence of the legislators means a lot. It injects me with a feeling of “you can do it!” “keep fighting!” It’s taken many years to get where we are, but we are not going to give in. We are going to continue doing what we are doing, and until the day when a survivor can call the police or go to court without fear, we will fight and advocate for these bills to be passed. Through Latinas Know Your Rights, victims start gaining a sense of empowerment and self-confidence in knowing that their voice can make a difference. Today, victims eagerly reach out to me asking to share their testimony, they know their stories are powerful and can lead to change if lawmakers can hear them. They want to change hearts and minds by sharing their experiences so that other victims don’t have to suffer the same way they did.

Immigrants’ Day was an incredible success, but the fight is not over. We need you to call or email your legislator today. If they have been supportive of immigrants, especially through supporting these bills, thank them. Tell them why this issue matters to you and why it matters to survivors of domestic violence. But we need you to call or email especially if your legislator has not been supportive. Talk to them and tell the stories of why you support immigrants’ rights and why this issue impacts survivors.

When immigrants feel safe, our entire community is safer. We need to unite to create a safer network for all of us. This is not just my or your community, it belongs to all of us. And it takes all of us to recognize and alleviate the pain that our undocumented neighbors are going through now. The Safe Communities Act and The Work and Family Mobility Act will be a huge step in that direction.