In my role as the Annual Fund and Communications Specialist, I work closely with donors and community members and I often find myself having in-depth conversations with folks who have been involved with REACH for many years. As they reflect on their personal history with REACH and the changes that have happened over time, I can’t help but feel extremely lucky to have the opportunity to hear these stories and learn from those who are driven by the same mission that I am – ending domestic violence and creating safe communities for all. Recently, I had the honor of meeting two of the founders of REACH over Zoom. I must admit, I was “fan-girling” just a bit as they reflected on the early days of organizing and laughed about the challenges they faced along the way. Hearing their stories and those of so many others reminds me that change can happen when a dedicated group of people band together in support of their community.

We kicked off our 40th Anniversary Celebration at our Annual Meeting on April 13th hosting a fireside chat with the founders of REACH (which at its origin was named the Waltham Battered Women Support Committee, Inc). Exactly 40 years ago on April 13, 1981, Robin Braverman and Paula Screnci-Vacaro, along with Joanne Pettengill, signed incorporation documents on Robin’s living room floor. These papers officially registered REACH as a 501c3 nonprofit organization. While this marked an important milestone in our history as a nonprofit organization, the work to support survivors of abuse had already begun. Starting in the early 1970s, the first domestic violence shelters opened their doors in California, Arizona, and Minnesota, and in 1974, the first Boston area domestic violence programs – Transition House, RESPOND Inc., and Casa Myrna Vasquez – were started. The feminist movement (also known as the women’s liberation movement or just the women’s movement) was at its peak at the time and according to Robin, the work was intrinsically connected to the domestic violence movement. Robin stated:

Accessing help was a life and death situation for many experiencing abuse, but in 1981, domestic violence was still an extremely taboo subject – especially in communities outside of Boston in cities like Waltham. Paula reflected on signing their first lease for a three-bedroom shelter and not feeling safe enough to tell the landlord why they were renting the space. There was little trust in law enforcement or the court system and most of the early days of organizing consisted of hushed conversations at kitchen tables and in church basements. During the conversation at the Annual Meeting, Paula stated that “The program started with just the two of us and what we had were resources.” And that was where it began – two women who saw a problem in their community and knew that change needed to happen. Eventually, REACH grew from a rented shelter and a hotline run by volunteers out of the basement of Robin’s home to a program that now serves over 7,000 people a year.

Change didn’t happen overnight. It took years to build trust within the community and to secure reliable funding to ensure that the doors to REACH would remain open. Societal change was slow moving and outdated laws continued to put victims at risk. It wasn’t until 1993 that marital rape was considered a crime in all 50 states and there were very few laws in place that explicitly protected survivors. BIPOC and LGBTQ+ folks faced even more barriers when it came to accessing services, and domestic violence was not considered grounds for asylum in the United States until the late 1990s. Racial and gender inequity plagued not only our movement, but our country as a whole. Even today in 2021, we are still fighting for legislation to protect those experiencing abuse. 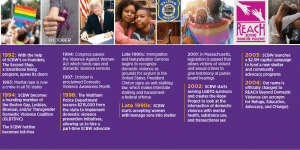 Although there was – and still is – so much work to be done, advocates across the country have made great strides. Over the years, the Violence Against Women Act (VAWA) has been revised multiple times to address the specific needs of women of color, immigrants, and LGBTQ+ folks. Most recently in 2019, VAWA was reauthorized and closed the “boyfriend loophole” by prohibiting those convicted of abusing, assaulting, or stalking a current or former dating partner from owning a firearm.

REACH has also grown immensely and expanded our programs to not only address the needs of survivors but to also prevent violence before it begins. In 2005, we launched our Peers Against Violence Educators (PAVE) program, providing in-class health education and leadership development for youth in an effort to prevent dating violence. In addition to our focus on prevention work, REACH staff has continued to tirelessly advocate for legislation on both the state and federal level to protect all survivors – from the Safe Communities Act to the Safe Driving Bill – we remain committed to making our community as safe and equitable as possible. In 2020 when the COVID-19 pandemic hit and we were forced to close our newly renovated office space, we pivoted our services completely so our work could be done virtually.

Since 1981, every year has presented REACH staff with new obstacles and also new reasons to celebrate. While it may not be perfect and there have definitely been some bumps along the way, the history of REACH is unique and defines who we are. We are an organization built by passionate individuals who wanted to see change happen and to this day, we continue to be inspired by those who came before us. Their passion for organizing and community outreach is still at our core and their desire to change social norms and systems of oppression in order to prevent and ultimately end domestic violence is one of the values we try to live out every day. This work is not done in a vacuum and one of the most important lessons we have learned from our founders is that it truly takes a village.

Over the past couple of months, I have been reaching out to that village. I have sent emails and made phone calls to former and current staff, volunteers, founders, survivors, board members, community partners, and other folks who have helped mold REACH into the organization it is today. I asked them to make a short video or write something in honor of our 40th anniversary. The prompt was simple – we asked folks to speak about their involvement with REACH, what they have learned about domestic violence, and what their wishes are for the future as REACH grows as organization and as a thought-leader.

Over the next few months, our hope is to collect and share 40+ videos that highlight the voices of those who make REACH more than just a nonprofit organization – the voices that make REACH a community. Check out the first video in our new anniversary series “Celebrating 40 Years and 40 Voices.” If you are interested in creating a video yourself or writing a reflection in honor of our 40th anniversary, please reach out to me at lizzy@reachma.org. We couldn’t do this work without you, our community. We thank you and all of those who played a part in this work for making us who we are today. Cheers to 40 years!