March 8th was International Women’s Day – a day to universally celebrate women. Globally, people use this day to celebrate all women by acknowledging women’s achievements in all aspects of life. Women have a long history of marginalization and have been silenced politically, academically, and societally. International women’s day has been celebrated since 1911 as a way to bring together all women and appreciate accomplishments and individuality. The United Nations states “International Women’s Day is a time to reflect on progress made, to call for change and to celebrate acts of courage and determination by ordinary women, who have played an extraordinary role in the history of their countries and communities” (United Nations). This day is also a day to recognize the intersectional aspects of being a women and the challenges posed by race, gender identity, and sexual orientation and the importance of recognizing those challenges that many women face.

International Women’s Day reminds me to appreciate the work that I have done and the challenges I have faced as a young female academic. Throughout my education I have been called gendered slurs, silenced by school administrations because of my gender, defined solely by my appearance, and experienced a general lack of appreciation for my work because of my gender. As a STEM student, it has been particularly challenging to have my voice heard in the classroom as well as the workforce; men’s voices have seemed to be the loudest and most appreciated while my ideas were easily overlooked.

I have experienced these issues since I was young –  one example occurred during 9th grade. I was passionate and interested in biology and fascinated by the mechanisms that operate our bodies. One project in my class required group work, and my group consisted of two male students who were more interested in humanities. I did  most of the work and while I encouraged my classmates to participate, I was interested and excited to learn and was the only one who spoke while giving the in-class presentation. The next day our project reflections had come back and I had lost points because I did not allow enough time and space for my group mates to participate. I was stunned and embarrassed and felt chastised because it felt that my teacher was scolding me for being “too bossy” or a “know-it-all”; terms I had heard used by my peers to intimidate and silence enthusiastic students. This is not to say that my male science teacher was deliberately silencing my voice but rather that his privilege allowed him to not be conscious of the consequences his words had on my young malleable brain. The standards that are set for girls and boys make comments such as these feel valid while they simultaneously silence students, such as myself. Girls are often met with different standards than their male peers; boys are called leaders and driven while girls are called controlling and overbearing which are terms that intimidate and dichotomize girls and boys in education and in the professional world. I felt as though I was being told that my passion and interest was interfering with my peers’ education and that it was my responsibility to hold them accountable for learning, even though it meant that I was unable to continue learning myself as their female peer. 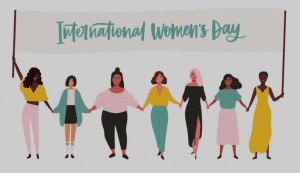 Looking back today, I recognize a dichotomy between the way that my male peers were evaluated and the way I was evaluated. People who identify as non-binary, are in the LGBTQ+ community, people of different races, are all marginalized by language, structure, and partiality that have large, unfair impacts on those students.

National Women’s Day to me, is walking into my University biology class today and asking every question I have, getting the resources that I need, and validating my right to learn and be active in the classroom. This day can be interpreted differently and hold different significance for everyone. It’s the beauty of societal growth and appreciation for one’s self while encouraging all other people around them; embracing differences and appreciating abilities.