Last night, REACH Beyond Domestic Violence held its 15th annual Reach for the Stars Gala at the InterContinental Boston Hotel. This special night was not only the 15th anniversary of the Reach for the Stars Gala but it also marked the 10th anniversary of our Survivor Speakers Bureau. More than 300 guests were in attendance at the event, which featured a cocktail hour with silent auction, then a formal program hosted by emcee Robin Young from WBUR radio. 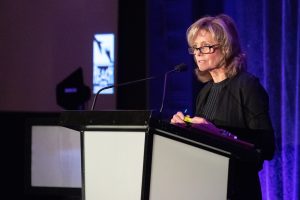 Young introduced REACH Executive Director, Laura Van Zandt, who spoke about October being Domestic Violence Awareness Month, and about REACH’s theme for the month of “Your Voice Matters.” She said:

“So many survivors of domestic and sexual violence have been repeatedly told their voice did not matter – by friends, family, clergy, law enforcement… On this night, on this stage, their voice matters. Three hundred people they don’t know sit in the dark and listen. To them. And believe them. And you support them in their work to reclaim their voice, their life. The experience at Stars is part of their healing, part of their story. Last month, as the members of the Speakers Bureau worked together on their exquisite art pieces, many of them reflected on that experience. One woman’s words say it all, ‘as I stepped off of that stage, I felt that I stepped into a new part of my life’.”

Attendees also heard from Tracy, a member of REACH’s Survivor Speakers Bureau. Tracy was the first survivor from the Speakers Bureau to tell her story at Stars ten years ago and she reflected on what that meant to her:

“Ten years ago, speaking at the REACH Gala, was very meaningful to me, in reclaiming my voice, being heard, and believed. It was so powerful and impactful to be supported. The belief that REACH had in me and the confidence they gave me are things I have carried with me for the past ten years. So tonight, I am here again to share my story. It is an honor to mark the anniversary of Speakers Bureau and reclaiming my voice. I am here to celebrate and speak my truth.” 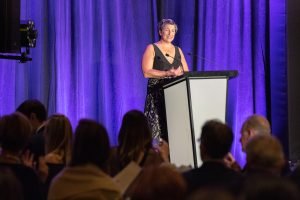 The evening raised over $400,000 to support REACH’s programs and services. We are grateful for the support from sponsors, auction donors, event guests, and our event committee – we couldn’t have done this without your generosity.