How Do We Respond to a Tragedy Like Orlando?

In the wake of the shooting in Orlando last weekend, I have seen many calls for system reform and legislative change. I personally appreciate the desire for continued measures to protect the LGBQ/T community from harm (lesbian, gay, bisexual, queer and/or transgender).  Hate crimes – defined by the FBI as a criminal offense against a person or property motivated in whole or in part by an offender’s bias against a race, religion, disability, sexual orientation, ethnicity, gender, or gender identity – are a fact of our current life.  Among the LGBQ/T community, the transgender community is particularly targeted but legislative action alone won’t change that.

We can talk about the shooting at the Pulse nightclub as an attack on the LGBQ/T community.  We can also talk about it as an attack on the Latinx community.  We can talk about the link between acts of communal violence like this and intimate partner violence. But these identities aren’t exclusive and neither are the many other identities we can add to the list of targeted groups in the United States: Muslim, Black, Jewish…

This past weekend marked one year since nine members of Emanuel African Methodist Episcopal Church in Charleston, SC were killed in a hate-filled shooting.  The news is filled with stories of hate.  A lot of people hate other people.  But in this past week, I have focused on and found myself more often overwhelmed by the love that exists in the wake of the Orlando shooting as well as the love that is being shared by the Charleston community.  I see so much love.  Is it because I know what to look for or because it is what I want to see?  While reading all the news stories this week, I was reminded of Martin Luther King Jr’s words, “Hate cannot drive out hate; only love can do that.”

How do we combat hatred?  In 2010, the Southern Poverty Law Center published the guide Ten Ways to Fight Hate: A Community Response Guide.  If only it was that easy right?  Maybe it is. 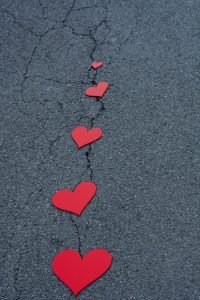 We can place blame on other people but can we take the steps to look inside ourselves as well.  Step 10 says “It begins with me: Human rights experts recommend starting with the language we use and the assumptions we make about others… Do I take the time to listen and learn from other people’s experiences, especially people with whom I might initially disagree?”

At REACH, we believe in conversation.  When we say we do community engagement work and domestic violence prevention, it means let’s talk.  Let’s get to know each other as people and understand different worldviews and experiences.  Let’s hear what you have learned about relationship violence and we can tell you what we have learned.  When we do direct service work, we say we provide trauma informed relational advocacy.  This means we listen to people.  Truly listen.  We want to know who they are – what is important to them, what they value, what moves their hearts.

REACH is in the business of conversation.  Shouldn’t we all be?

To learn more about our work and get involved with building healthy communities with less hate and less violence, click here.