How to Talk about Consent with a Three-Month Old (and older!)

In her speech at the Golden Globes, Oprah Winfrey spoke of a future where no one would ever have to say #MeToo. With recent conversations about the prevalence of sexual harassment and assault through awareness campaigns like #MeToo, I feel there is a heightened awareness of the need to both teach and model respect in order to eradicate gender-based violence such as sexual assault and domestic abuse. It has been a professional and personal goal throughout most of my life to achieve this future Oprah spoke of. I’ve been talking with parents and other caring adults for years about how to talk to their children about healthy relationships and consent. It’s only been in the last 9 ½ months that I’ve had to learn how to do this myself as a first-time parent. I’ve always encouraged parents to talk with their kids about these concepts early and often- now I get to practice what I preach.  We want our children to know that they have the right to communicate their boundaries and that they will be heard and valued.  Even when we know these conversations are necessary, it can be hard to know how and when to start having them.

Because my daughter was born prematurely, she receives services through Early Intervention. One of the first programs we participated in was infant massage, which has a lot of benefits for preemies. A physical therapist met with us for several weeks to instruct me on how to administer massage to my daughter, starting when she was just 3 months old. In our very first lesson, I was told that one of the core principles of this practice is to always verbally ask your child for consent before beginning the massage. This may sound strange, since my daughter was barely 7 pounds at the time and unable to understand my speech or to verbally respond, yet she was constantly watching me and communicating with me in countless ways. This practice helped me to develop a habit of asking for consent constantly. Each time we started a massage lesson, I would ask for permission and then narrate to my daughter what I was doing and would let her know that I will follow her cues if she became upset or uncomfortable. When she would communicate with me through her physical cues or by crying, I would thank her for telling me how she feels, and stop what I was doing. In our everyday lives, it’s not always possible to not do something that makes my daughter upset. When I have to do something that she doesn’t like, like changing her diaper when she’s overtired, I tell her that I hear her, and I see that she’s upset and I narrate why I need to do what I’m doing. Am I always perfect at this? Especially when I’m overtired, too? Of course not. It is a practice, and like anything else the more I practice the easier it becomes.

I am striving to create a foundation for my daughter that I can continue to build on the older she gets. I hope that my actions are sending her the message that communicating her feelings is valuable, and that her boundaries are important and will be respected. Children are incredibly observant and will learn from what they see us say and do. Sometimes we can be unaware of the implicit messages we send through our own words and actions.

This summer I had a rare opportunity to sneak off to the beach alone; it was a mostly blissful 30 minutes where I tried to read and not worry too much about how my daughter was doing without me. There was a young family nearby. The father was teasing his daughters and while the tone was light, his language caught my attention. He started to call out to his daughter, who was probably around 8 or 9 years old, “I want to bite your butt!” His daughter would laugh and scream, “No!” and he would respond, “Oh yes I will! I made your butt so I can bite it whenever I want!” She continued to yell, “No!” back at him, and as this back and forth continued her laughter became less and less and she seemed to tire and then become annoyed with the joke. It’s hard to say no over and over again to someone you love.

From observing his energy, it really felt like this father was just trying to be funny. Each of us has our own parenting style and demeanor, and I didn’t want to make snap judgments. And yet, I couldn’t help but think about other messages this young woman may hear later in her life. When we send a message to our children that their boundaries don’t matter, by joking that we can do whatever we want because we are their parents or by pressuring them to hug a relative when they don’t want to, it makes it harder for them to discern when a peer or another adult sends a similar message as they get older. While I know this father likely didn’t think his joke could cause any harm, I couldn’t help but think that his language was not a far cry from someone saying to his daughter in the future, “I bought you dinner so now you owe me.” The Mentors in Violence Prevention curriculum uses a tool called the Pyramid of Abuse to illustrate that what is often considered harmless behavior- such as jokes and off-hand comments- is the solid foundation that supports attitudes and social norms that allow devastating gender-based violence like sexual assault, domestic violence, and even homicide to continue.

Children look to the adults in their lives to set an example. We can support them in building foundational knowledge of consent and respect for themselves and others. Let’s show our children that consent matters by starting a conversation with them about it today- no matter how old they are! 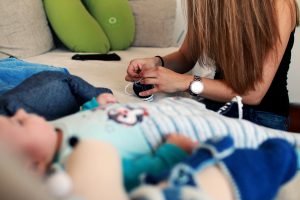 Why comprehensive, medically accurate, and LGBTQ+ inclusive sex ed matters to me

"All you need to do is say no." "Condoms and birth control are the only forms of contraception [...]