It’s Not the Beer. It’s the Privilege.

Does Christine Blasey Ford remember the fear as a teenage girl, the feeling of hands on her body that she did not want there, the sound of the laughter that completely ignored her fear? Does she remember the shame, the self-blame, the years of trying to forget, the impact of this one incident on her decisions over a 30 year period? I believe she does.

Does Brett Kavanaugh remember this incident? I believe he does not. I believe it blurs with others during his adolescence. Fun times with pals. Getting what they want while drunk on privilege. Day and night. Week after week. None of it really stands out because it is all the same – take it. Get it. Deserve it. 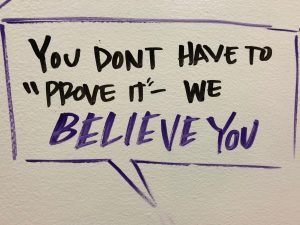 Surrounded by a culture that says that boys need it and girls have it and boys gotta get it if they want it because she isn’t going to just give it up – this reinforces the belief that a “little bit” of encouragement, getting past the no, and feeding off incitement by others – that is how it is done. It wasn’t the beer that made Brett and Mark go after what they wanted – laughing all the way – it was the privilege. Using the power they had to take what they wanted… it wasn’t the beer talking. It was the privilege.

Christine Blasey Ford and Brett Kavanaugh can look back on high school, parties, even our country’s history and tell different stories. They lived in the same era, and they lived those days as very different people. The power and privilege that Brett Kavanaugh has consumed and metabolized throughout his life, is still being fed to him – in large quantities – like sucking down a beer funnel in a college apartment. It comes at him fast and furious and he takes it all in. He doesn’t spill a drop. He can’t see through the “privilege goggles” he wears every day. He’s so accustomed to wearing them, he forgets they’re there. And no one reminds him.

As a white, rich, male in America, Brett Kavanaugh has moved in circles that did and do not challenge his privilege. The systems in place do not challenge it. His daily life experiences do nothing to challenge it. Kavanaugh is swimming in a deep sea of privilege with a strong current of power. And he has been swimming for years. The people who have experiences that differ from his do not have a voice in his circles or in our country. His ability to see the truth of others’ experiences is underdeveloped, if not completely missing.

A party at the beach during a high school summer with beers and friends is part of his “privilege soaked” experience. Brett and his peers have always had access to almost anything they want or “need” – there was/is no limit – they are the good guys, the good boys, and they deserve what they seek. Certainly they work hard. And play hard. But it is not the beer that blinds them or obscures their memory. It is the privilege. Drunk on it, they cannot see the pain that happens around them and certainly not the pain they cause.

Does Kavanaugh still like beer? Sure he does. Lots of people like beer. Beer isn’t what has shaped his jurisprudence over the years. Privilege has shaped his analysis, his decisions, his writing, and his view of the world.

Does a grown Brett Kavanaugh drink with the abandon of a 17-year-old at the beach? Probably not. Does he drink like a carefree college student? Unlikely. Does he continue to live like a privileged white male with no understanding of his power? Yes.

And that is what makes him unfit to be confirmed to the highest court in the land.

In Honor of Laura Van Zandt

My friends tease me that I am too naïve for thinking a workplace led with integrity and [...]