Shining a Light on Domestic Violence

This October (which also happens to be Domestic Violence Awareness Month), I’ll be celebrating 20 years of working in the sexual and domestic violence field. In those 20 years, I’ve had the opportunity to speak to thousands of people about these issues. It’s been my honor and an important responsibility to bring topics that are often shrouded in the darkness of secrecy and shame into the light. In September alone, I’ve had the chance to speak with close to 900 people- from small intimate gatherings of half a dozen colleagues, to hundreds of educators in district-wide trainings. I’ve also had the honor of co-facilitating our 35-hour training for our new volunteers, interns, and staff. In this month, and over the past two decades, I’ve seen many training participants experience life-altering revelations, as they learn information that deeply affects their lives and the lives of so many others, but often isn’t widely accessible outside of these training spaces and workshops. I know, intimately, the intense feelings that can accompany these first “ah-ha” moments as truths about relationship abuse are shared and myths are shattered.

My entry into this work was because of my own ‘ah-ha’ moment when I attended my first presentation about relationship abuse. As I heard the facilitators use terminology and share definitions that I had never heard before- and debunked my limited understanding- I remember feeling a fire building inside of me. By the end of the presentation I felt like a spotlight was shining directly on and through me. I felt the heat of shame and embarrassment for not knowing this information already, and the fiery passion to do my part to ensure that others were more informed than I had been. I knew that my lack of knowledge had made me more vulnerable to relationship abuse and created what had felt like an insurmountable barrier to tell anyone what I had experienced- I simply did not have the words. Now that I had this new found language and understanding, I was instantly committed- if not somewhat desperate- to ensure that no one else face that same barrier.

I was, and am, deeply fortunate to live and work in Massachusetts. After that first presentation, I was able to volunteer with the group that delivered it, and through them became connected to the incredible network of domestic and sexual violence organizations in the greater Boston area. I was surrounded by amazing practitioners who trained me and mentored me in those early years… and still do today. And what I learned early on, was that how I conveyed my message was just as important- if not more so- as what I was trying to convey.  My initial instinct was a form of guerilla warfare:  I wanted to ambush everyone around me with this knowledge that altered my life and world-view, I wanted to force them into caring by filling my presentations with stark and alarming statistics and sharing disturbing and heartbreaking stories pulled from headlines and sensationalized true crime television shows. I knew that the secrecy and shame that surrounds these issues was keeping too many survivors suffering in silence. I didn’t want to slowly shed light on this topic, I wanted to beam a spotlight on it. 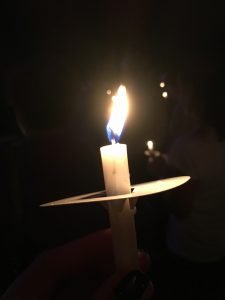 But this approach had the opposite effect than I was hoping to achieve. Rather than draw people into the conversation and inspire them to become involved, it only served to shock, awe, and often trigger my audiences. People left feeling more overwhelmed and powerless, rather than motivated and empowered. Over time, and with a lot of support, I learned that raising awareness about an existing problem is an important step, and that it can be done with great care. A spotlight may shine brightly in a small distinct area, but it casts more darkness in the space surrounding it. Rather than illuminating this issue in a way that people can digest, it can serve to marginalize and diminish motivation. We cannot shock someone into caring. Caring and motivation happen through connection. My primary objective wasn’t just to increase others’ knowledge of this issue, but rather that they would feel motivated to do something about it.

Early into my time at REACH, I had the opportunity to work with an incredible group of college students who were in the early stages of planning a Domestic Violence Awareness Month event on their campus. In our meeting, I listened to the activities they had planned and the stories they wanted to share, and it became evident to me that they were attempting the same tactic I had- to try to shock people into caring about domestic violence. If we want our audiences to care about this issue, we also need to foster a space where they feel cared for and cared about. I asked the group what they wanted their audience to feel at the end of the event and they shared words such as ‘inspired’ and ‘empowered’. As we reviewed their agenda for the event, I asked them to list the words they thought their audience would feel by the end of the evening, and the words they listed included ‘powerless’ and ‘overwhelmed’.

To foster intrinsic motivation, we need to utilize approaches that address and mitigate the pain and overwhelm that these topics can bring up, rather than add to it. Especially now, there’s more than enough overwhelm in our lives. Our conversations about these topics need to leave folks feeling more empowered and less powerless. Providing opportunities to share strategies that anyone can tailor to their life/personality/role and take an action allows us to see ourselves as an agent for change. We can remind ourselves and others that small actions can often make the biggest difference in someone else’s life.

Before he passed, my late brother in-law used to host monthly Shabbat dinners at his home in San Francisco. At the beginning of the night he would invite everyone who attended- often dozens of people who had never met before- to share something meaningful with the group, and then light the candle held by the person next to them. By the end of the ritual, a once darkened room was full of light, and a room full of strangers became a room full of connection. It was a simple yet powerful way to build community and a sense of belonging. In March, in the early days of the shut-down, many of my neighbors hung their holiday lights back up. On dark cold nights, we would drive around town just to get out of the house, and these colorful lights sparked joy and hope for our whole family. It reminded us of the kindness of our neighbors and allowed us to feel more connected and less isolated from our community.

This year, our theme for Domestic Violence Awareness Month is “Shine a Light on Domestic Violence” and we invite you to join our efforts to foster connection. Let’s raise awareness to counteract the isolation and darkness that abuse thrives upon. we will be offering information and strategies through our #ShineALightOnDV toolkit here that you can tailor and utilize to help raise awareness and empower those in your life to take action.