It is hard to put into words how proud I am of the historic win we experienced with the passing of the Work and Family Mobility Act! For more than a decade Latinas Know Your Rights has worked alongside the MIRA Coalition and its members including the ACLU, Brazilian Worker Center and many other organizations that fought hard to build support from the ground up. I am proud of the work we have done but more importantly I am proud of the many survivors who, over the years, had the courage to share their stories with legislators as they advocated for this bill. Latinas Know Your Rights was invited to the symbolical signing of the Work and Family Mobility Act. It was such a moving sight to see the same women who bravely started sharing their testimonies 13 years ago, now standing at 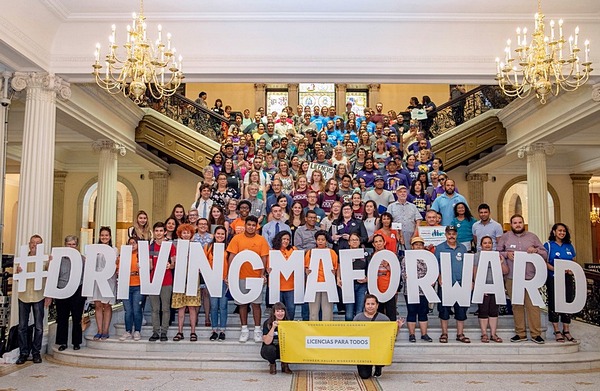 the signing of the very bill they worked so hard to support. This is what successful legislative advocacy looks like! Highlighting the voices of those who need to be heard to initiate social change.

The Work and Family Mobility Act will enable all qualified state residents to apply for a standard Massachusetts driver’s license, regardless of immigration status, while keeping our Commonwealth in full compliance with REAL ID requirements. The bill is now officially law and will become effective in July 2023.

Looking to the future, there will be a lot of work that needs to be done. There are forums to prepare to educate the community on how to obtain the driver’s license. We must keep breaking down barriers related to language or continued fear of deportation and rebuild trust in law enforcement. Latinas Know Your Rights (LKYR) will be there every step of the way for the community.

This bill is so significant for LKYR not just because of what it will do for the community but because LKYR grew alongside state-wide initiatives to pass the bill. With the help of Mithra Merriman, my LKYR co-founder, we used the Safe Driving Bill (as it was formerly called) to educate participants on how the legislative process works in the U.S. At the end of each LKYR session, we discuss, as a group, a way for us to take action to create meaningful change. Our goal is to empower survivors to use their voice to educate and make that change – with time the Safe Driving Bill along with the Safe Communities Act became the causes that survivors most wanted to support. Once our relationship with MIRA grew stronger, survivors themselves decided to share their testimony in favor of the bill. We worked hard to prepare LKYR participants, helping them develop language to describe their support for the bill, build their confidence in speaking out and developing a sense of trust that standing in front of lawmakers would be safe regardless of their immigration status. Survivors talked about how having a drivers license would make their lives safer by being a means to escape violence as they faced dangerous situations complicated further by their immigration status. They tearfully shared their stories over the years, often facing opponents of the bill who were strongly against any measure that would benefit the undocumented community.

One of my fondest memories is from 2013, when LKYR organized a forum at Saint Mary’s Church in Waltham to discuss the Safe Driving Bill by bringing both supporters and opponents of the bills together. Each member of LKYR was tasked with a different responsibility, for example, creating and disseminating flyers at community events, church parking lots and more. It brought our group of survivors together, showing them that despite immigration status, work can be done to advocate for change.

On several occasions, we filled school buses with LKYR participants ready to support the Safe Driving Bill at rallies and at Immigrants Day at the State House. On one such occasion, survivors decided they wanted to coordinate and wear only black pants and white t-shirts to show their unity. Over the years we’ve had one-on-one meetings with the Speaker of the House, held phone banks, spoken with news outlets, and attended many in-person events – even the children of survivors wrote letters to legislators.

The pictures in this post speak for themselves. They illustrate years of dedicated legislative advocacy, hope for change and commitment to a better future for all. Thanks to persistence across many organizations, the leadership of MIRA and the tireless energy of immigrant supporting organizations, this bill was finally passed. When I think of this bill, I will always think of the courageous women who used their voices over the years to share their story and support. It’s incredibly inspiring and gives hope that change is possible no matter the circumstance!