Why We Care About Transgender Equality (And What We Should Do About It!)

This past Monday, I sat across from my grandma at an Italian restaurant in Boston, munching on garlic bread in the summer air. We looked over the menu and chatted about my packing list for school, and I laughingly complained about sore wrists and biceps from scooping ice cream at work earlier that day. I was completely at ease with our server and fellow restaurant-goers: I didn’t have to fear being denied service because of my gender identity. It didn’t even occur to me to worry about using the restroom during our meal, because I knew that there would be a safe and comfortable bathroom available for me. 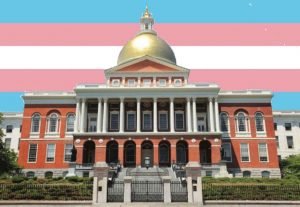 The absence of worry is a marker of my privilege as someone whose gender identity matches the sex I was assigned at birth (also known as “cisgender”). Most of us walk through life everyday with this privilege without even noticing it, taking for granted the legal protections and equal access to public accommodations that are not guaranteed for transgender people.

In June of 2016, the Massachusetts Legislature expanded trans equality in state law, prohibiting discrimination on the basis of gender identity in public accommodations. Importantly, the “Act Relative to Transgender Anti-Discrimination” allows everyone to use the bathrooms and locker rooms consistent with their gender identity, regardless of biological sex. But the bill is about much more than bathrooms: it is an important step in expanding protections for trans people in Massachusetts in all public accommodations, augmenting the legislation already in place to protect trans rights in the workplace and in schools. As Mason Dunn writes, “Public accommodations are all the places we go when we’re not at home, work, or school. These include movie theaters, restaurants, parks, public transportation, and coffee shops; and yes, it includes being able to do something as basic as using the restroom in these places.”

Because I’m not trans, I just don’t know what it feels like to exist without feeling safe in public accommodations, including the basic right to public bathrooms—this is why listening to trans voices is so important. In a TED talk I recently watched, Ivan Coyote offered some painful insight: “Today as a trans person, public bathrooms and changing rooms are where I am most likely to be questioned or harassed. I’ve often been verbally attacked behind their doors. I’ve been hauled out by security guards with my pants still halfway pulled up. I’ve been stared at, screamed at, whispered about, and one time I got smacked in the face by a little old lady’s purse.”

The harassment that Ivan and many other trans people face, not only but especially in gender-segregated accommodations like public bathrooms, reflects the central role that bathrooms play as a symbol of widespread confusion, misunderstanding, and discomfort with trans people. Safe and comfortable access to public accommodations, without the fear of harassment, should be guaranteed to everyone in Massachusetts. But an anti-trans coalition has put the June 2016 Act up for repeal on the ballot this November, placing the future of the Act into our hands as voters. And, as is the pattern across the U.S., bathrooms have been the focal point of opposition to and discomfort with this Act, with trans access to bathrooms held up as a threat to safety. Though this is not true, clearly many people do feel vulnerable when it comes to talking about bathrooms. And safety—of cis and trans people alike—is a very important priority. Violence and sexual assault are real and frightening concerns: working as an intern at REACH, I have witnessed first-hand the trauma and pain of sexual violence and the importance of anti-violence work. Our community advocates emphasize safety as a #1 priority in their work with survivors of domestic violence. And here at REACH, we know that public safety and trans equality are not at odds, not incompatible. Rather, the two necessarily go hand in hand.

First of all, when trans people are allowed equal and safe access to public accommodations, including bathrooms that match their gender identity, there is no evidence for an increase in assault or other violent acts in bathrooms. CNN points out that as of March 2017, nineteen states had anti-discrimination laws protecting the rights of trans people in public accommodations and bathrooms. Yet when CNN researchers reached out to twenty law enforcement agencies in these states, not one had reported a single bathroom assault since the law had been put into effect. In Maine, which has had legal protections for trans people for eleven years, the Human Rights Commission is unaware of any incident of bathroom assault. Thus, while opponents of the June 2016 Act in our own state continue to utilize the rhetoric of safety, maintaining that such a law enables sexual predators and endangers the public, this is simply not true.

And while cisgender people aren’t less safe when sharing bathrooms with transgender people, trans people are a lot less safe when we force them to use bathrooms that match their biological sex, rather than their gender identity. Think back to Ivan, who has been verbally and physically harassed when forced to use the women’s room. An expansive survey of transgender and gender non-conforming individuals found that 70% of respondents reported denial of access, verbal abuse, and physical assault in public bathrooms. And according to recent research by the Gay, Lesbian, and Straight Education Network (GLSEN), more than two-thirds of trans students in middle- and high-school reported avoiding bathrooms because they felt unsafe or uncomfortable. As Ivan says of so-called “bathroom bills”: “They don’t make anyone safer. But they do for sure make the world more dangerous for some of us.”

With the Act that Massachusetts passed on June 2016, we took an important step toward to providing safety, protection, and equity for trans people. But our fragile step toward equality is threatened on the ballot this November: Ballot Question #3 asks whether we should keep the Act in place or repeal it, leaving in its place no legal protections for trans people in public accommodations. Statistics and facts can feel abstract, but each of the numbers above represents real people, experiencing painfully real harassment every day. I am reminded of this reality by the frustration and pain of trans and gender non-conforming people in my own life. When I see headlines proclaiming the possible repeal of the “Act Relative to Transgender Anti-Discrimination,” I know that behind the legal language is a law that protects people I care deeply about. Without it, they will face greater harassment in all public spaces, from buying a cup of coffee to taking the T. This is not a political matter or a partisan issue: it is a question of common humanity, dignity and respect. The ability to safely exist in public spaces, without risking harassment and assault, should be a guaranteed right for all people in Massachusetts, and that starts with allowing trans people to use whichever bathroom they are most comfortable in.

So what can we do? First and foremost, make sure you are registered to vote and vote YES on question three! (Confusingly, a “yes” vote will keep the law in place, while a “no” vote will repeal it). Spread the word and this blog post around to keep educating people about the fight for trans equality. Keep reading! There are some articles attached below this post, if you want to learn more about the issue. Most importantly, try to remember your privilege the next time you use a public restroom, and imagine what it would be like if you couldn’t count on this most basic of resources. Remember that deconstructing systems of privilege, fighting for justice, and ensuring safety for everyone is above all a practice of empathy, a struggle in which we all have a role to play.

For more information, check out this article!