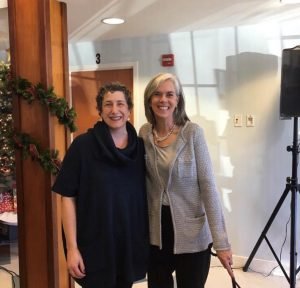 On December 18, 2018, REACH was pleased to join Congresswoman Katherine Clark along with advocates from the MSPCA, ASPCA, HSUS and fellow DV organizations for an important announcement. The press conference was covered by many media outlets, all of whom crowded into the MSPCA Angell West facility in Waltham – also occupied by several rescue dogs (available for adoption) and a few furry friends of the human attendees.

The reason for the gathering was the passage of the Pets and Women Safety (PAWS) Act. This bill was originally introduced in 2014 after Congresswoman Clark arrived in DC. It was passed as part of the Farm bill and signed by the President on December 20, 2018.

Clark fought for legislation in Massachusetts before heading to Washington. For years, she has advocated that no one should have to make the choice between finding safety and staying in a violent situation to protect their pet. The Congresswoman’s intention is that “this law empowers survivors with the resources to leave a dangerous situation while being able to continue to care for their pet.”

At REACH, we hear the stories from survivors about abusers injuring or threatening to injure or withhold pets as a tool of abuse. So often, survivors stay with an abusive partner in order to protect others – including pets. In other cases, survivors have returned to an abusive situation because they are unable to find a safe place for their pet. In one study cited by the above press release, “as many as 25 percent of participants reported returning to an abusive relationship out of concern for their pets.” REACH operates a shelter program and we know the challenges of supporting a survivor with a pet in a community where children or adults have fears or allergies to animals. We welcome the technical assistance and/or funding from the PAWS Act that can help us and other programs in creating safe places for pets and the people who love them.

We are so proud and grateful for Congresswoman Clark’s partnership and dedication on this issue. She said it best at the press conference – “Together, we will help save lives.”