10 Tips for Being a Good Listener

For Domestic Violence Awareness Month (DVAM) 2016, our theme is “Listen and Believe.” While that might sound simple and straightforward, listening is a skill that we can all develop and improve over time. At REACH, we often hear from friends and family who are concerned about a loved one who is in an abusive relationship. So often, friends and family are worried about having the “right” thing to say when they start a conversation with the person they are concerned about. We have found that it’s less about what we say, and more about how we listen. Because survivors are often being silenced in their relationship with their abuser, providing a space where they can speak openly and not feel judged can be imperative to offering your support. Here are 10 tips on how to open the conversation and listen to someone who has experienced abuse:

1. Ask open-ended questions – those that start with words like how, what, would and could. Try to avoid “why” questions, that can sometimes sound blaming.

2. Keep the focus on them, and on their focus. Let the other person drive the conversation. It’s perfectly natural to be curious, and helpful to interject those open-ended questions ,but don’t try to force a survivor to talk about something just to satisfy your curiosity. Focus on the issues that seem important to them. Use those open-ended questions, gently, to try and stay on topic.

3. Use Reflection. Repeat back the words and/or emotions that you’re hearing. If a survivor says “I’ve just been feeling so exhausted,” you could respond with, “It sounds like you’ve been feeling really exhausted…” You can also use reframing language such as, “it sounds like” or “it seems like…” 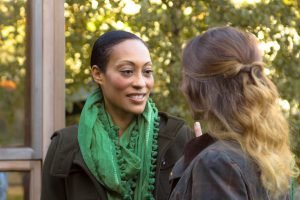 4. Summarize. Tie together the things you’re hearing and provide a focus. “You have mentioned a lot of different instances where it sounds like you felt disempowered and unable to do what you wanted to do, maybe even felt powerless. When you mentioned… and … I was struck by how…”

5. Clarify. Don’t assume you know what they meant by something. Ask clarifying questions such as “So how did you feel when that happened?” “Let’s go back for a minute so I can make sure that I fully understand…” Doing this demonstrates that you’re listening, you’re hearing, and that you’re interested.

6. Know the role that culture plays. Don’t assume that you know someone else’s culture. Everyone has different backgrounds. Try to avoid stereotyping and assumptions at all costs.

7. Be aware of the language they – and you! – are using. Use the same terms that the survivor is using. If they say, “my boyfriend,” use the word boyfriend when reflecting back, even if you’d normally say ‘partner.’ Try to avoid labels. Terms like survivor, victim, domestic violence, abuse, abuser…all have different meanings and connotations for different people. The best way to know which terms someone is comfortable with is to use the ones they are already using.

8. Reframe. This is similar to reflecting, but changes up the words a little. A good way to do this is often to start with phrases like “It seems like…” or “It sounds like…” If the person you are supporting is blaming themselves or putting themselves down, it can be difficult to hear. Let them know you hear how they’re feeling, and use “I” statements to let them know that you don’t blame them. An example of this could be, “I hear that you feel like this is all your fault. I just want you to know that I don’t blame you for what happened. But I hear that you feel that way right now.” We want to validate their experience, while also letting them know that someone doesn’t blame them, since abusers will often use blame as a tactic of their abuse.

10. Be aware of what active listening is NOT. It’s not giving advice, it’s not sharing your own experiences to the point that it pulls the focus off of them, it’s not criticizing or judging, and it’s not forcing. If you are talking to someone who’s experienced abuse, they have more than enough of someone telling them how to think, feel, and behave. As concerned as you are for your friend or family member, the best thing you can do is listen (and believe!) and give them the space to decide what they want, and then support them in getting there.