Not long ago, I had the pleasure of training a group of collegiate male athletes. Their team, along with other athletic teams at their university, were participating in a day focused on addressing and preventing gender-based violence. As soon as we began our workshop together, it was evident that this was a group of young men who were highly motivated, not only to learn about these issues but to also become agents of change on their campus. We each acknowledged the unique and important position they were in to be able to make a real difference; as both men and athletes many people wouldn’t expect them to be vocal about issues of domestic and sexual violence and would take notice. I could feel their enthusiasm to bring the leadership they displayed on the field to this cause.

Throughout our conversation we discussed not only the strengths they had to tackle these issues, but also the challenges they have faced/may face. Several participants talked openly about how hard it could be to talk to other men in ways that felt authentic and vulnerable. The narrow confines of masculinity that many felt pressured to follow didn’t allow them to acknowledge emotions other than happiness or anger, and openly expressing sadness and other emotions felt almost impossible. The consequences for breaking out of this box felt intimidating. As one participant put it, “The worst thing another person can do to you is to question your manhood.” As we talked about their strategies to address gender-based violence on campus, we also had to talk about the reality of what it would entail. To help illustrate this, I drew a picture on the board: 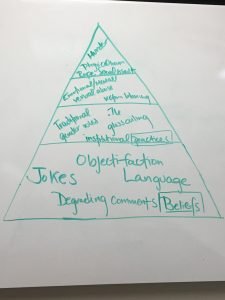 “This,” I told them, “is what we call the pyramid of abuse. There are different versions of this, all used to show how culture supports gender-based violence and other expressions of oppression (misogyny, racism, homophobia/transphobia), etc. At the top of the pyramid, are the most egregious forms of abuse – such as rape, physical abuse, domestic violence homicide, etc. What allows those forms of violence to happen at such an alarming rate is that they are built on a solid foundation of cultural norms that condone these behaviors rather than condemn them.” It’s one thing to say, “I am against domestic violence – I would never hit my partner!” It is another to reexamine the ways that we speak, joke, and relate to one another and notice how our words and actions (and often, inactions) can give a different message. I reminded this group that they had expressed how committed they are and had already taken tremendous strides to address and prevent gender-based violence on their campus. If, while taking a stand publicly, they privately still made sexist jokes in the locker room or they remain silent if they noticed a friend’s controlling behavior – then all those good efforts could be negated. It’s on us, we agreed, to hold ourselves and each other accountable.

This concept of accountability is one that we’ve been discussing a lot at REACH lately – you may have noticed some of the articles we’ve shared on social media that focus on this topic. For me, discussions of accountability bring up more questions than answers. For us to hold abusers accountable, it requires a recognition that abusers are not evil monsters as we might like to believe, but rather people we know and may even care about. Which brings up the question many of us struggle with – why do people abuse others? There are many different answers and theories to this question, but one important answer we too seldom discuss is that abusers abuse – and continue to abuse – because they can. Our silence, if we don’t find ways to approach difficult conversations and hold people we love accountable, allows abuse to continue and thrive.

For me, I know that if I want to hold others accountable for implicitly and explicitly supporting systems and cultural norms that support domestic and sexual violence (sometimes referred to as rape culture), I have to start with myself. I have to examine the ways that I benefit from systems of oppression and challenge myself to not remain silent or passive. I have to challenge myself to continue an “unlearning” process when it comes to ways I was socialized around gender, race, ethnicity, ability, religion, class, and sexuality. Just as I can hold my loved ones accountable, I can ask my loved ones to do the same (without asking them to bear the burden of undoing my ignorance).

This may sound like a lot of work, and it truthfully isn’t an easy or perfect process. I have, and will, make mistakes. But the other thing I remember when having conversations about accountability, is that holding others and ourselves accountable is an act of love. It allows us to disrupt cycles of violence and hopefully alleviate or prevent future suffering. It doesn’t have to start with a grand gesture – more often, it will start with informal one-on-one conversations. Check in with a friend who you notice has been acting jealous or possessive around their partner and ask them about it in a non-judgmental, concerned way. You could say something like, “I’ve noticed that you seem to get really stressed and upset when you don’t hear back from your partner immediately. Is everything okay?” Share information about healthy relationships and offer resources if they need support. Let them know that you care about them and because you care, you won’t turn a blind eye to their behavior. Having these conversations gets easier the earlier and more often we have them.

REACH is here to support you on how to start the conversation about domestic violence. Visit our website for information on upcoming trainings. Check out these online resources on how to be an active bystander with friends, families, and colleagues. Together we will reach beyond domestic violence.